Adopt Me! Wiki
Register
Don't have an account?
Sign In
Advertisement
in: Pets, Ultra Rare, Ultra-Rare Pets,
and 9 more

View source
watch 02:59
Wiki Targeted (Games)
Do you like this video?
Play Sound
Not to be confused with Zombie Buffalo Plush.

The Zombie Buffalo is a limited ultra-rare pet, which was added to Adopt Me! on October 18, 2019 as a part of the first addition of the 2019 Halloween Event. It cost

The Zombie Buffalo has a mint green body with a brown overcoat. It has a mint green head and medium-sized white horns. Its front legs are brown, and back legs are plain white. It also has a tail that looks as if a bone is sticking out. It looks like a Buffalo with different color accents. It has a toy counter-part, which is the Zombie Buffalo Plush.

Here are the tricks the Zombie Buffalo learns in order:

The Neon version of the Zombie Buffalo glows bright red on its eyes and nose.

The Mega Neon version of the Zombie Buffalo has its nose alternate through the colors of the rainbow. However, its eyes remain bright red. 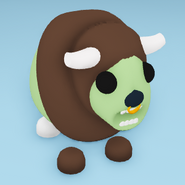 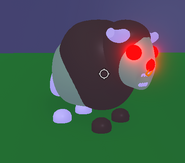 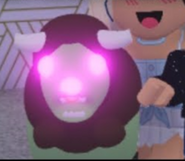