Adopt Me! Wiki
Register
Don't have an account?
Sign In
Advertisement
in: Pets, Events, Limited,
and 5 more

The Zodiac Minion Chick features a yellow chick with a capsule-shaped body. It has two round orange feet, a yellow tuft on its head, and a pointed beak. It wears a single-piece set of goggles with dark blue lenses and a black band; a single black eye can be seen below these goggles.

Listed below are the tricks the Zodiac Minion Chick learns in order: 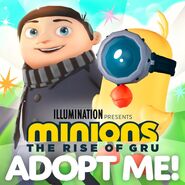 A teaser image of the Zodiac Minion Chick.