Adopt Me! Wiki
Register
Don't have an account?
Sign In
Advertisement
in: Pets, Ultra Rare, Ultra-Rare Pets,
and 9 more

The Yeti is a limited ultra-rare pet in Adopt Me! that was introduced during the Winter Holiday (2020). It could have been purchased for

6,000. As the event ended, it is now currently only obtainable through trading.

The Yeti has a large white body with layers of fur. It has blue arms, and the same colors for its feet, and face. It has two big black eyes and a lighter blue oval shaped nose. The Yeti also has two light blue horns on top of its head, which are the same color as its claws and nose.

Here are the tricks the Yeti learns in order:

The Neon Yeti glows a light yellow-orange color on its horns, claws, and feet.

The Mega Neon Yeti glows in the same areas as the Neon Yeti, except these areas cycle through the colors of the rainbow. 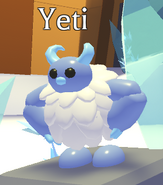 The Yeti on display. 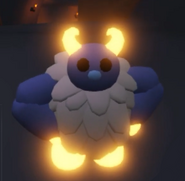 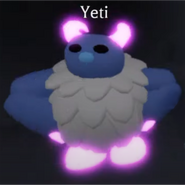