Adopt Me! Wiki
Register
Don't have an account?
Sign In
Advertisement
in: Vehicles, Legendary Vehicles, Star Rewards,
and 2 more

View source
watch 02:53
GTA: The Criminal Enterprises - The Loop
Do you like this video?
Play Sound
Not to be confused with Wizard Caravan.

The Witch’s Caravan is a three-seater legendary vehicle that is awarded when a player reaches 600 stars in Star Rewards.

It is the last vehicle that can be obtained in the Star Rewards list, and the second to last reward overall, the last one being the Golden Egg.

The Witch's Caravan appears to be a cart belonging to a merchant or a hawker. Its main body is light brown in color, with some additional parts in darker brown. Both colors are presumably meant to symbolize wood. The caravan notably features two rockets boosters strapped to its side, which are similar to those found in the Rocket Sled. Both of the rockets are connected to the cart with vines. While the shape of these rockets is similar to those of the Rocket Sled, their colors are different, consisting of a transparent piece (inside of which is a glowing orange piece), a black piece, and conclude with a purple piece as the tip. It also has three potion decorations on the top.

There are three seats in the Witch's Caravan, including two passenger seats. One passenger seat is a wooden bedside cabinet, and the second one is on the roof along with the potions. The driver's seat is a wooden chair located in front of the cabinet. The Witch's Caravan has four brown wheels, which appear to resemble the wheels of a typical carriage. They somewhat resemble a shrunken version of the wheels found on the Pumpkin Carriage.

In terms of speed, the Witch's Caravan is absurdly fast, due to the two rockets which are strapped on to its side. Its speed is comparable to that of the Rocket Sled, albeit slightly slower. Its incredibly fast speed makes the Witch's Caravan the second-fastest vehicle in the game, however, the advantages that could be gained from this insane speed are practically nullified when taking into consideration the caravan's incredibly poor handling and bulky size. This makes the caravan incredibly easy to crash and tip over if the player doesn't drive incredibly slowly and carefully. Even when driving slowly, the handling of the caravan is still a huge detriment. Overall, the Witch's Caravan is not to be used in a practical scenario, as it is way too uncontrollable.

The Witch's Caravan has three seats, making it the highest seated vehicle that can be obtained from Star Rewards. Even still, the caravan's noticeable flaws still don't make it a practical choice for everyday transportation. 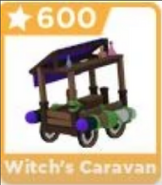 The Witch's Caravan as seen in Star Rewards. 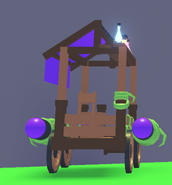 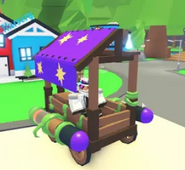 A player riding the Witch's Caravan.
Community content is available under CC-BY-SA unless otherwise noted.
Advertisement