Adopt Me! Wiki
Register
Don't have an account?
Sign In
Advertisement
in: NPCs, Interactable, Winter Holiday (2020),
and 2 more

Winterkin was an NPC previously located in front of the Winter Castle that was added to the game as part of the Winter Holiday (2020) on December 15, 2020. Winterkin gives the player riddles, which lead to the three pieces of the Snowball Launcher or to the locations of the five snowmen that need to be built by the player. Winterkin can no longer be found in-game, as their respective event has ended.

Winterkin has white skin and hair. On top of the hair, it has ice-shaped horns. He wears a dark blue, long sleeve shirt with ice shards sprouting on top of his shoulders. He also wears a belt and light blue pants.

When a player first interacts with Winterkin, this is their dialogue:

"Greetings! I am Winterkin, spirit of the snow. I am the Winter Hinter! Have you been looking for something for some time? I will assist you, but only in rhyme!"

These riddles were for the Snowball Launcher pieces.

These riddles were for the snowmen that had to be built around Adoption Island. 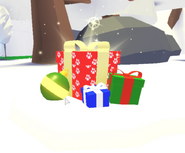 Example of a present pile where the Snowball Launcher pieces can be found.
Community content is available under CC-BY-SA unless otherwise noted.
Advertisement