Adopt Me! Wiki
Register
Don't have an account?
Sign In
Advertisement
in: Events, Limited, Collectible Items,
and 26 more

There was a sale on gamepasses and pets in the Pet Shop starting on December 22, 2020, and ended on January 5, 2021. Additionally, there was furniture added to the furniture catalog that were based on decorations from the Ice Castle.

In the map, the lake is frozen and players are able to skate on the ice instead of swimming in the lake. As players skate, they can collect

Gingerbread by passing through the gingerbread shapes on the ice, which disappear when collected. There are penguins that move around on the ice as well, and if a player bumps into a penguin, it knocks the player down, immobilizing them for a few seconds, while the penguin states a random selection from a set of angry messages, including:

A new set of

160 is restored to the ice every 20 minutes or each Adopt Me! day. However, every 2 days, when the Frost Fury Feeding Frenzy Minigame is happening, they don't appear until the next day. Once you've collected all the Gingerbread, you collect it in a red ring near where the recent racing ranks are there.

The ice also contained a racecourse. The path of the course was indicated by large rings that appear in front of the player as they go, leading around and over various ramps and other obstacles. The next target ring is bright yellow, and the one after that is a darker gray. As the player passes through each yellow ring, the gray ring turns yellow, and the next gray ring appears, such that there are always two rings ahead of the player to guide them, first a yellow and then a gray.

Near the starting line of the racecourse, which is under the tan bridge, there is a Golden Penguin NPC named Speedy The Penguin. When a player talks to Speedy, the penguin offers them a race. After the first time a player completes the race, they are rewarded with

800; subsequent races are a convenient way to collect all 160 gingerbread, but are otherwise just for fun and/or bragging rights.

This minigame is found in one of the buildings in the Snow Castle. In it, players receive a torch. There are a variety of foods found frozen in chunks of ice. Players must stand near the ice with their torch to melt it and receive points. They earn

Gingerbread based on the points they have gotten. There are various obstacles along the path such as slippery ice, rolling boulders, and geysers that freeze you. The deeper you go into the cave, the more points you'll get. Once players finish the minigame, they will find a huge cauldron of multi-colored food with the Frost Fury NPC telling the players to come back later to help feed him again.

Each day, five melted snowmen are found scattered across the map. When approached, it will ask for help. Once a player builds all five, they receive

The Winterkin NPC is found near the Snow Castle. When interacted with, she gives a rhyming clue to the locations of Melted Snowmen, gifts needed to search for in order to get parts of the snowball launcher, or information about the Frost Fury Feeding Frenzy Minigame.

Note: The Pet Wear that cost

Bucks were available in the Hat Shop, while the ones that costed

Gingerbread were available in the Ice Castle.

The shop for the event.

Outside the Ice Gate and the building where the Feeding Frenzy minigame takes place.

Outside the Winter Castle. 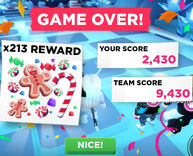 The Snowman on display. 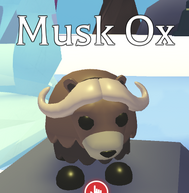 The Musk Ox on display.

The Lynx on display.

The Yeti on display.

The Snow Owl on display.

The Frost Fury in the shop.

The Image Cover during the Winter Holiday (2020) Update.

Exchange rate of Robux to Gingerbread
Community content is available under CC-BY-SA unless otherwise noted.
Advertisement