Adopt Me! Wiki
Register
Don't have an account?
Sign In
Advertisement
in: Food, Interactable, Bucks,
and 3 more

1 and can be used to fulfill the 'Thirsty' ailment on pets and babies.

There is also a Water Cooler furniture item, which costs

The bottled water that can be purchased from Farm Shop is light blue and has a dark blue and gray label, as well as a dark blue cap. The cup of water obtainable from the Water Cooler is in a white cup, and the dark blue liquid inside is visible. 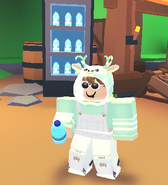 A player holding the Water Bottle.