The Unicorn is a legendary pet in Adopt Me! that players can obtain by hatching a Retired Egg or through trading. It was added in the Pet Update as one of the first legendary pets along with the Dragon.

The Unicorn's mane is sequentially pink, green, and yellow. It also has a white body with a pink horn, white legs, and a pink tail behind it. Its body is very similar to the Horse, Evil Unicorn, Golden Unicorn, and Diamond Unicorn pet, as the same model was used.

Here are the tricks the Unicorn learns in order:

The Neon version of the Unicorn glows on its hooves, horn, tail, and mane with the same color in its regular form, except its white hooves glow into a bright pink color.

The Mega Neon Unicorn glows in the same areas as its Neon form, but it immediately shifts from pink to purple, then yellow to teal.

The Unicorn, Griffin, Rat, Monkey, Penguin, Ladybug, Bee, Reindeer, Bat, T-Rex, Ox, and the Dragon are the only types of pets that have different types of themselves. The Unicorn has a few different variants of itself: 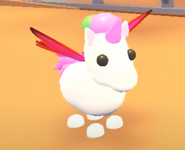 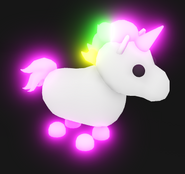