The Turtle has an olive green-colored body with beady black eyes on the sides of its head and a beige underbelly. It carries a semi circle-shaped shell on its back that has a slightly darker color than its body, along with seven green raised scutes.

Listed below are the tricks the Turtle learns in order:

The Neon Turtle glows lime green on its feet and the darker part of its shell.

The three shells inside the Turtle, used for Trick 2. 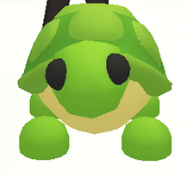 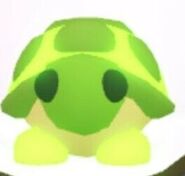