Adopt Me! Wiki
Register
Don't have an account?
Sign In
Advertisement
in: Pets, Limited, Uncommon,
and 6 more

The Triceratops is a limited uncommon pet, which was released in Adopt Me! on October 10, 2020. Its release was confirmed in the Fossil Isle Excavation Event, which started on October 2, 2020. As it is now unavailable, it can only be obtained by trading or hatching any remaining Fossil Eggs. Players have a 30% chance of hatching an uncommon pet from the Fossil Egg, but only a 10% chance of hatching a Triceratops.

The Triceratops features a tawny and green colored dinosaur with three white horns on its head, beady black eyes, and a snout. Its feet are yellow and tinted with orange; on top of its back, it is colored the same orange. Behind its horns, there is a fan-shaped, beige frill.

Here are the tricks the Triceratops learns in order:

The Neon Triceratops glows bright green on its horns, spikes, stripes on its back and tail, and feet. 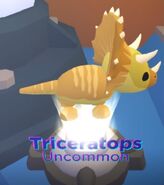 The Triceratops on display in the Fossil Isle Excavation. 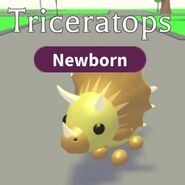 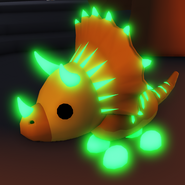 A player riding a Neon Triceratops.