Adopt Me! Wiki
Register
Don't have an account?
Sign In
Advertisement
in: Vehicles, Legendary Vehicles, Gifts,
and 7 more

The Traveling House is a three-seater legendary vehicle in Adopt Me!, obtainable as a prize from an older gifts rotation. It can now only be obtained through trading.

Much like its contemporary Gift Display legendary vehicles, it was only available for one week at a time, and if a player didn’t purchase it before the deadline, then they must wait until it becomes available as a prize again, which would be two weeks after.

The Traveling House, like its name suggests, is a wooden cabin on wheels. The cabin itself has a small front porch, where the steering wheel and driver's seat are located, a few windows, and includes a non-interactable kitchen and bunk bed. Two passengers and/or pets can sit on a couch inside the house. The Traveling House is one of the only vehicles that does not change size when a player is playing as a baby, the others being the Choo Choo Train, Ice Cream Truck, and Dragon Train.

The Traveling House bears a striking resemblance to the now removed treehouse previously located in The Playground, but with smaller roof ledges and the entrance being on the right instead of the left side.

The Traveling House is one of the largest vehicles in the game, and despite what its rarity might suggest, it is not an efficient vehicle. Its large, bulky size makes it very slow, with speeds akin to that of a Bike. Its size also makes it very hard to maneuver around tight corners and cramped spaces. It can cross most of the bridges in Adoption Island, however, the bridges must not contain any obstacles for it to do so. If the Traveling House falls into the river, it is impossible for it to get out, and it can't go under bridges due to its enormous size. When you drive it, it is almost impossible to see where you are going as it's size makes it block most of your view, so you have to try to see out of the small window behind the driver's seat.

It is possible for more than 3 players to ride in the Traveling House, but very often the other players will glitch through the floor when the house is in motion, much like the Ice Cream Truck. The Traveling House does not satisfy tasks, such as sleeping or eating, despite having a bed and kitchen. 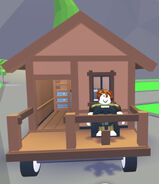 A player riding the Traveling House.

The Traveling House as seen in-game.
Community content is available under CC-BY-SA unless otherwise noted.
Advertisement