Adopt Me! Wiki
Register
Don't have an account?
Sign In
Advertisement
in: Food, Potions, Gameplay,
and 3 more

View source
watch 02:53
GTA: The Criminal Enterprises - The Loop
Do you like this video?
Play Sound
Please note: This was made only with the intent to spread knowledge to other players and NOT for offering items.

Trading is a source of sending items to another player and receiving items from another player in Adopt Me!. Players used to be able to trade up to 4 items to the other player through the trading system. The 2020 Trading Update, released on November 5, 2020, has increased the amount of items that players can trade up to 9, but also added a test that players need to pass to unlock the Trade License, which is required for trading ultra-rare or/and legendary items. This was done to in an effort to prevent scams.

To begin trading with someone, the player needs to click the player they want to trade with, and then select 'Trade' from the interaction menu, or press 1 for keyboard users. The other player will receive a trade request, which they can choose to either accept or decline. If the player accepts, both players enter the trading menu. Each player can add an item by clicking the green "+" icon and selecting the item they want to trade. Clicking on an item in the trade menu removes it from the trade. When a trade begins, a counter in the bottom right corner of the menu begins counting from 5, and every time a player puts a new item or removes one, the timer resets. This cool-down prevents users from accidentally accepting a trade after items are removed, added, or replaced. When the countdown ends, it turns into a green 'accept' button, and both parties then need to press it for the trade to be successful. If any of the two users leave the game or select the red 'decline' button at any time during the trade, it will not go through. Another case in which the trade will not go through is via fail trading, but that is no longer available as Adopt Me! has addressed that by turning off player interaction icons while in a trade.

If a trade is judged as “unfair” by the game, a pop up warns the player with the 'unfair' trade that scamming is a bannable offense, and warns the other party that they might be getting scammed. If both parties proceed, the system gives the players 15 more seconds to accept or decline, so they can think their trade through.

If the other player's trades are turned off or put their setting to "friends only" through the settings, they will not receive any trading requests, and the player sending the trade will be prompted accordingly.

The Trade License allows players to trade their ultra-rare and legendary items if they pass the Trade License test. Players can also use it to view their trade history. Without it, players are unable to trade their ultra-rare and legendary items. To complete the trading test and obtain the license, players need to go to the Safety Hub, which is behind the Farm Shop.

Beware, some users manipulate others to obtain their items in a wrongful way. Players are advised to be alert at all times and use the intended Adopt Me! trading system. Players that have been scammed can report the trade using their Trade License.

The current Adopt Me! trading menu.

The old Adopt Me! trading menu, with 4 slots instead of 9. 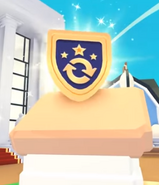 The Trade License on display. 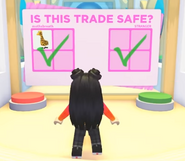 Part of the test needed to be answered correctly if the player wants to continue on getting their Trade License.

The rules of trading which pop up when sending a trade request.