Adopt Me! Wiki
Register
Don't have an account?
Sign In
Advertisement
in: Monkey Fairground Event, Pets, Ultra Rare,
and 6 more

3 Cymbal Ingredients combined with a Monkey

The Toy Monkey is a limited ultra-rare pet that could be obtained from the Monkey Fairground by combining three Cymbal Ingredients and a normal Monkey. The ingredients can be obtained through opening Monkey Boxes. Once you are finished collecting the items, you can talk to the Toy Monkey inside the Circus Tent to the right side of the Fairground and hand them the ingredients to receive your Toy Monkey. Along with the Toy Monkey, you also get a Fez Hat. Once the Fairground event has finished you will not be able to create any new Toy, Business, Ninja, or King Monkeys, but the ingredients to do so will remain as the event has been planned to return at non-specified dates in the future. To make a Toy Monkey you will need

585. As the event has ended, it is now currently only obtainable through trading.

The Toy Monkey is a reskin of the Monkey. It is a blue monkey that has a red shirt with yellow buttons, and has cymbals in its hand and hanging off its tail. It comes with a removable pet accessory, the Fez Hat.

Listed below are the tricks the Toy Monkey learns in order:

The Neon version of the Toy Monkey has a glowing golden color on the insides of its ears, on its hands, and on its feet.

The Mega Neon version of the Toy Monkey has glowing spots in the same places as the Neon Toy Monkey, except the spots shift through the colors of the rainbow. 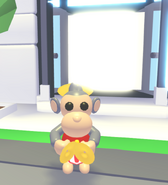 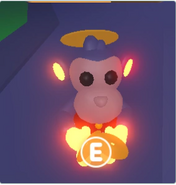 The Toy Monkey in the Monkey Fairground update cover image.
Community content is available under CC-BY-SA unless otherwise noted.
Advertisement