Adopt Me! Wiki
Register
Don't have an account?
Sign In
Advertisement
in: Shopkeepers, Pet Shop, Interactable,
and 2 more

Tom was the old NPC shopkeeper of the previous Pet Shop before the renovation update. He sold pet food, chew toys, and leashes. He was also present at the beginning of the Pets Update and the Fossil Isle Excavation Event.

This was what Tom used to say when a player interacted with him:

"Woof! Oops, sorry, thought you were a dog! I don't see many people in here that often, so I just learnt how to speak dog. Want to see some? Woof buy me a coffee woof... I mean bark. You know what to do..."

During the Fossil Isle Excavation Event, he said this when a player interacted with him.

"Welcome to Fossil Isle! Are you a paleontologist looking to find fossils too? We'll need as many fossils as we can find if we want to bring back fossil eggs. I need them to power my time machine. Grab any tool from the tent, then head on over to the excavation and get digging! I can't wait to see some dinosaurs again. It's been too long!"

When Fossil Eggs were being released, he said this:

"The time machine is about to start! I can't wait! It's working! The DNA is powering the machine. Just need to give it time... This is all perfectly normal, don't worry! There's bound to be some power fluctuations. This reminds me of that time in the Cretaceous. Let's hope that doesn't happen again. Here it comes! Are you ready? We did it! A fossil egg! Now we can hatch extinct animals!"

A player interacting with Tom previously. 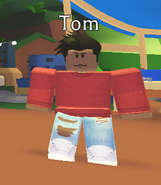 Tom at the Fossil Isle.
Community content is available under CC-BY-SA unless otherwise noted.
Advertisement