Adopt Me! Wiki
Register
Don't have an account?
Sign In
Advertisement
in: Interactable, Limited, Toys,
and 2 more

Inside the Pet Shop

The Vault in Adopt Me! can be found in the Pet Shop. It is large and circular with ornate detail and had a lock in the middle. You can press E or tap on the Vault to examine the lock, which then displays a message that says "Hmm.. I wonder what's behind this?" There are also many toys around the Vault for sale.

Getting in the Vault

A way to glitch into the Vault is to equip a Grappling Hook (such as the Crossbow, Plunger, or Ice Pick) and spam-clicking the Vault.

There's also another way to glitch inside, which is through using a stroller and let the baby inside the Vault. Doing this will get you into a second chamber. This one has a large golden sphere, also with a lock. You cannot interact with this one.

In the '???' update, there was a new way into the Vault. If the player went to the newly-located Burt, between the red bridge and the Hospital, they would have found an underground place underneath his fishing hook. Inside, the player would be asked to look for the three parts of a key. This key, in turn, leads to the Vault in the Pet Shop. One piece was straight in the cove ahead. The next one would have been in the staircase area, while the last one would on the top of the tallest tree. When the player opens the Vault with this newly-assembled key, they would find the Founder's Crown inside, standing on a pedestal.

Now, sadly, you can't use the key to open the Vault anymore. After the Dress-Your-Pet update came out, the Founder's Key turned into a throwing toy named Founder's Key Throw Toy. 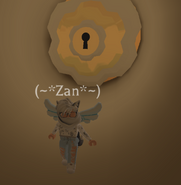 The top of the vault 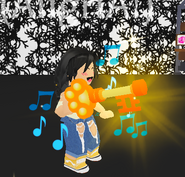 A player holding the Founder’s Key.
Community content is available under CC-BY-SA unless otherwise noted.
Advertisement