Next to the Coffee Shop.

The Playground is a place in Adopt Me! located on Adoption Island where players can bring their babies or pets in order to cure the "Bored" ailment. On February 14, 2020, the Playground was remodeled to also include a pet park, which had more interactable features.

During the 2019 Halloween Event, the Playground was replaced with the Graveyard until November 1, 2019. Players could visit the Candy Trading Shop or do the Graveyard challenge to obtain

Candy, the event's currency. Players had to memorize which graves the ghosts went into.

The Obbies are now located behind the Playground, behind the big blue slide. Players can play on the left side of the Playground with the pet-related features on the right side. The top tree near the swings initially included a treehouse, which was later removed. 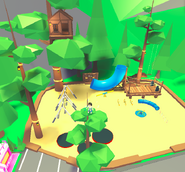 An aerial view of the Playground with the (now removed) treehouse.
Community content is available under CC-BY-SA unless otherwise noted.
Advertisement