Adopt Me! Wiki
Register
Don't have an account?
Sign In
Advertisement
in: Pets, Limited, Fossil Egg Pets,
and 8 more

View source
watch 03:01
Wiki Targeted (Games)
Do you like this video?
Play Sound

The Tasmanian Tiger is a limited common pet, which was added to Adopt Me! on October 10, 2020. Its release was confirmed in the Fossil Isle Excavation Event, which started on October 2, 2020. As it is now unavailable, it can only be obtained through trading or hatching any remaining Fossil Eggs. Players have a 25% chance of hatching a common pet from the Fossil Egg, but only a 12.5% chance of hatching a Tasmanian Tiger.

The Tasmanian Tiger features a brown-orange tiger with a light beige underbelly and under-chin. It has dark brown stripes extending down its back and two small, brown triangles beside the black eyes. This pet has brown triangular ears with orange fur on the outside.

The face of this pet is pointed, fox-shaped and similar to the Dingo's and the Arctic Fox's.

Here are the tricks the Tasmanian Tiger learns in order:

The Neon Tasmanian Tiger glows bright pink on the stripes on its tail and back, the inside of its ears, and its feet. 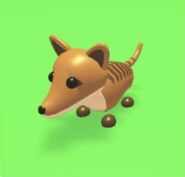 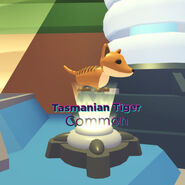 The Tasmanian Tiger on display in the Fossil Isle Excavation. 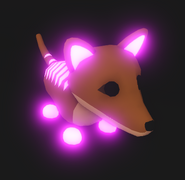 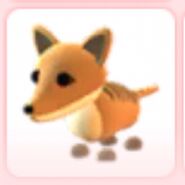 The Tasmanian Tiger in a player's inventory.
Community content is available under CC-BY-SA unless otherwise noted.
Advertisement