The T-Rex features a green dinosaur with a beige underbelly. It has small, brown spikes on its head, back, and tail. It has two small green arms and two large flat green back feet that have 3 brown claws each. Additionally, the T-Rex has two black eyes, two small nostrils on its snout, and white teeth that can be seen in its mouth. It also has brown stripes on its back.

Here are the tricks the T-Rex learns in order:

The Neon T-Rex glows bright orange on its spikes, the stripes on its back, and its claws.

The Mega Neon T-Rex cycles through the colors of the rainbow in the same parts where it glows when Neon. 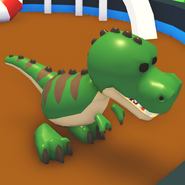 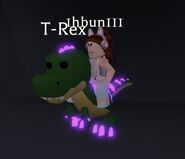 The T-Rex on the Fossil Egg Countdown Event Thumbnail.
Community content is available under CC-BY-SA unless otherwise noted.
Advertisement