The Swordfish is an ultra-rare pet that was released in Adopt Me! on July 21, 2022. It can be obtained by hatching a Cracked Egg, Pet Egg, Royal Egg, or by trading.

The Swordfish has a dark blue upper body, dark blue fins, and a sword-like bill. It has a yellow and white underbelly and beady black eyes.

Listed below are the tricks the Swordfish learns in order:

The Neon Swordfish glows yellow on its tail fin and upper underbelly. It also glows in yellow streaks on its upper fin.

The Mega Neon Swordfish glows in the same areas as the Neon Swordfish, except those areas cycle through the colors of the rainbow. 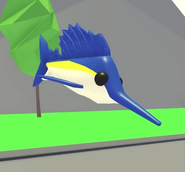 A teaser image of the Swordfish.