Adopt Me! Wiki
Register
Don't have an account?
Sign In
Advertisement
in: Pets, Interactable, Limited,
and 9 more

The Sugar Glider is a limited legendary pet that was released in Adopt Me! on April 14, 2022, along with the Easter Event (2022). It could be obtained by purchasing it for

500. As the event has ended, it can now only be obtained by trading.

The Sugar Glider has a brown body and tail, along with a white underbelly, small black whiskers, and a pink nose. It has wide wings that ends with its feet and paws. It also has a white-colored head with vertical brown stripes going across its face.

Here are the tricks the Sugar Glider learns in order:

The Neon Sugar Glider glows bright pink around the vertical brown stripes across its face.

The Mega Neon Sugar Glider glows in the same areas as its Neon form but it cycles through the colors of the rainbow. 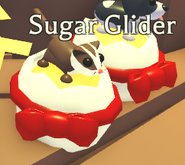 The Sugar Glider on display. 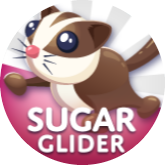 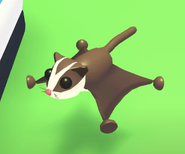 A teaser image of the Sugar Glider. 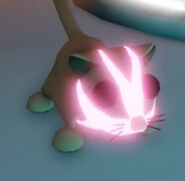