Adopt Me! Wiki
Register
Don't have an account?
Sign In
Advertisement
in: Pets, Common, Common Pets,
and 5 more

The Stingray is a limited common pet which was added to Adopt Me! alongside the Ocean Egg on April 16, 2021. It was removed from game on August 19, 2021, and can now only be obtained through hatching any remaining Ocean Egg, or through trading. Players have a 20% chance of hatching the Stingray from the Ocean Egg.

The Stingray has a flat and flexible body with two pectoral fins and a stinger near its rear. It is dark gray on the top and white on the bottom. It also has two beady eyes on top of its snout. The tail is dark gray along with a blackish tip. Its body is purplish blue.

Here are the tricks the Stingray learns in order:

The Neon Stingray glows a pink-lavender color on its underbelly.

The Mega Neon form of the Stingray transitions through the colors of rainbow in the same areas as its Neon form.

Adopt Me!'s teaser of the Stingray. 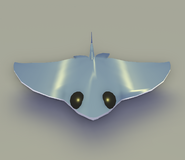 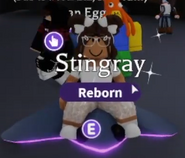