Adopt Me! Wiki
Register
Don't have an account?
Sign In
Advertisement
in: Pets, Ultra Rare, Ultra-Rare Pets,
and 2 more

The Starfish is one of the ultra-rare pets in Adopt Me! that can be obtained through the Star Rewards or through trading. It requires 550 Stars or about four months for players to be able to claim it from the Star Rewards.

The Starfish is an orange starfish with black eyes and three light orange spots on each arm, growing larger as it extends outwards. It also has pink, circular shaped, blush below its eyes.

Listed below are the tricks the Starfish learns in order:

The Neon appearance of the Starfish glows baby blue and pink. The small dots that go on the points turn into a baby blue, whilst the blush turn into a bright pink.

When made Mega Neon, the places where the Starfish glows in Neon goes through the colors of the rainbow.

The Starfish as it appears in the Star Rewards. 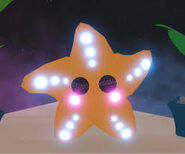