Adopt Me! Wiki
Register
Don't have an account?
Sign In
Advertisement
in: Toys, Toy Shop, Bucks,
and 4 more

Enables players to bounce up and down.

The Standard Pogo is a common toy in Adopt Me! that players can purchase from the Toy Shop for

150. This pogo tends to serve no purpose other than letting a player jump around while equipped. Players have the ability to change the color upon initially buying it. However, after the purchase has been made, the color of the toy is final and cannot be changed. 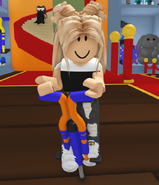 A player using the Standard Pogo.

The Standard Pogo's on display.
Community content is available under CC-BY-SA unless otherwise noted.
Advertisement