View source
watch 02:34
Fire Emblem Warriors: Three Hopes - The Loop
Do you like this video?
Play Sound
Not to be confused with Squid Plush.

The Squid is a legendary pet in Adopt Me!. It was released on January 27, 2022, during the Task Board Update. It can be obtained by opening an RGB Reward Box at a 4.5% chance or through trading.

The Squid features a pastel purple-colored body with eight tentacles, two longer tentacles, a dull triangle head, and a pastel blue underbelly. It has two beady black eyes surrounded with pastel pink, light green, and cyan blobs of color. The tip of its head is topped with a yellow color splash and pastel green designs.

Here are the tricks the Squid learns in order:

The Mega Neon Squid's color spots cycle through the colors of the rainbow. 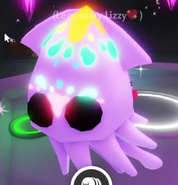 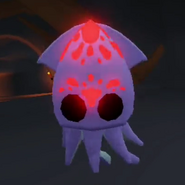