Adopt Me! Wiki
Register
Don't have an account?
Sign In
Advertisement
in: Vehicles, Bucks, Interactable,
and 5 more

The Speedboat is a limited rare two-seater vehicle in Adopt Me! which was added on August 5, 2021 and was removed from the game on October 21, 2021. It could have been purchased for

2,500 on a wooden pedestal beside the Pet Store and in front of the Hot Air Balloon.

The Speedboat is a small boat with a simplistic design. It has two black seats inside, and a prominent orange spoiler on the back. Despite being called a Speedboat, no engine or propellers can be found anywhere around the exterior of the vehicle.

The exterior of the boat is colored cyan by default, however, it can be changed by the player after purchase. The secondary white color cannot be changed. 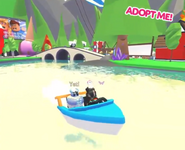 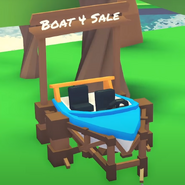 The Speedboat on display.

The Speedboat in-game.
Community content is available under CC-BY-SA unless otherwise noted.
Advertisement