Adopt Me! Wiki
Register
Don't have an account?
Sign In
in: Toys, Common, Common Toys,
and 10 more

Free (On the 14th day of the Advent Calendar)

The Sock Chew Toy is a common toy in Adopt Me!, which was obtainable from the 2019 Advent Calendar on the fourteenth day. It has been only obtainable through trading, as of December 14, as the Advent Calendar left after the event.

When used, an equipped pet picks up the toy in its mouth and stays in one area until the toy is picked up again.

The Sock Chew Toy features a red-bottomed sock, topped with white fluff at the tip. The appearance is believed to be based off of a classic stocking. 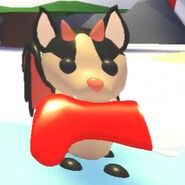