Adopt Me! Wiki
Register
Don't have an account?
Sign In
Advertisement
in: Snowy Igloo Shop, Bucks, Interactable,
and 7 more

Buying it from the Snowy Igloo Shop, trading.

The Snow Plow is a six-seater ultra-rare vehicle in Adopt Me! that was released during the Snow Weather Update. It can be purchased for

3,000 or obtained through trading. It can only be found in the Snowy Igloo Shop on the 28th of each month for 36 hours at a time, along with the other items in the shop.

The Snow Plow features a large yellow truck with a gray-white storage box on its back. It has four large black wheels, and has a yellow and gray snow plow at its front. It has three blue-tinted windows and a small steering wheel. 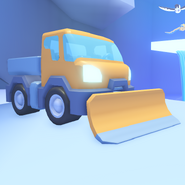 The Snow Plow on display.
Community content is available under CC-BY-SA unless otherwise noted.
Advertisement