Adopt Me! Wiki
Register
Don't have an account?
Sign In
Advertisement
in: Pets, Events, Limited,
and 9 more

The Snow Owl is a limited legendary pet in Adopt Me!, which was released during the Winter Holiday Event (2020). It could have been purchased for

10,000. As the event has ended, it is now currently only obtainable through trading.

The Snow Owl has a small, vibrant light blue body with white and baby blue feathers. It has a black beak and feet, and around its eyes are crescent-shaped moons that curve around its big, round, black eyes. When a player equips it, it floats up and down, and flaps its wings.

Here are the tricks the Snow Owl learns in order:

The Neon Snow Owl glows cyan on a few of its front feathers, the feathers above and around its eyes, and the tips of its wings.

The Mega Neon Snow Owl glows in all the same parts of the Neon Snow Owl, but it cycles through the colors of the rainbow. 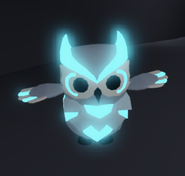 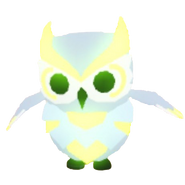