The Snow Cat is an uncommon pet in Adopt Me!, which can be obtained by hatching a Retired Egg or through trading.

The Snow Cat has a white body, complete with white paws and a tail. It also has a light pink fur inside its triangular-shaped ears, a pink nose, beady black eyes, and whiskers. It is a recolored version of the Cat, which is gray instead of white, and the Pink Cat, which is pink instead of white.

Here are the tricks the Snow Cat learns in order:

The Neon version of the Snow Cat glows bright pink in its inner ears, paws, tail, nose, and whiskers.

The Mega Neon version of the Snow Cat cycles through the colors of the rainbow within its inner ears, nose, paws, tail, and whiskers. 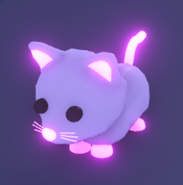 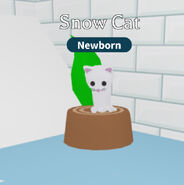