The Sloth is a non-limited ultra-rare pet in Adopt Me! that can be purchased for

199 in the Pet Shop or the gamepass menu on the right side of the screen. The Sloth was added in September 2019. It can also be obtained through trading.

The Sloth's appearance is similar to the Brown Bear, except that it has three claws, black eyes, a black nose, a light brown color around the nose and its eyes, and no ears.

Here are the tricks a Sloth learns in order:

The Neon version of the Sloth has its feet, nose, and claws glowing a light peachy yellow.

When the Sloth is in its Mega Neon form, the Neon Sloth's glowing areas cycle through the colors of the rainbow. 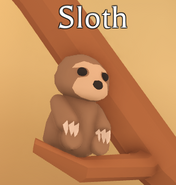 A Sloth on display in the Pet Shop.