The Silly Duck has a tall, green head with a thin white stripe around its neck, a flat yellow beak, two beady black eyes, a white body, and light orange feet. It tends to sway back and forth and bob its head while moving.

Listed below are the tricks the Silly Duck learns in order:

When made into a Neon, the Silly Duck's head and neck glow bright green.

The Silly's Duck's Mega Neon appearance glows at the same parts as the Neon version, but cycles through the colors of the rainbow. 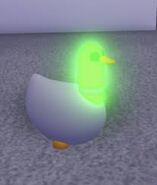