23,000. It became unavailable along with all the other Christmas Event items, on January 11, 2020, and is now only obtainable through trading.

Before the Dress Your Pets Update, the Shrew used to be called the Elf Shrew and had an Elf Hat on its head. The hat was removed and placed in the owner's inventory after the update, allowing players to trade it separately as a pet wear. Players who had a Neon Elf Shrew received four Elf Hats instead of one. Players could also receive an Elf Hat if they bought a Hedgehog.

The Shrew has a brown body, feet, and tail. It has a light tan underbelly and ears. In addition, it has a pink nose and has the same pink on the insides of its ears. It has black beady eyes, with a tan circle surrounding each one.

Listed below are all the tricks the Shrew learns in order:

The Neon version of the Shrew has a bright pink belly, while the Neon Elf Shrew used to have a yellow glowing bell on its hat.

However, the hat stopped glowing after the Dress Your Pets update. 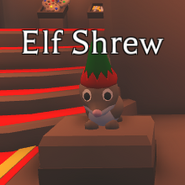 The Elf Shrew displayed in the Christmas Shop. 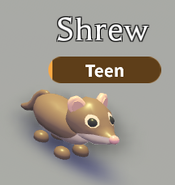 The Shrew after the Dress Your Pets Update. 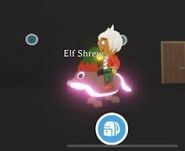 A Neon Elf Shrew before the Dress Your Pets Update. 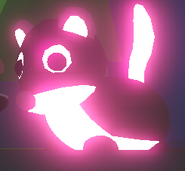 The Elf Shrew in a player's inventory (old).
Community content is available under CC-BY-SA unless otherwise noted.
Advertisement