The Shiba Inu is an ultra-rare pet in Adopt Me! that can be obtained from any egg available in the Nursery for a certain amount of

Bucks. The eggs are the Cracked Egg for

1,450. It can also be obtained through trading.

The Shiba Inu has mostly tan fur, with a white/beige underbelly, neck, feet, ear fluff and chin. It also has a black nose and beady eyes with a mauve tongue sticking out of its mouth.

Here are the tricks a Shiba Inu learns in order:

When made Neon, its ears, tail, and paws glow a yellow-orange color. 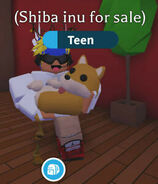 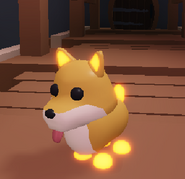 The Shiba Inu in Adopt Me!'s thumbnail for the Pet Greetings! update.
Community content is available under CC-BY-SA unless otherwise noted.
Advertisement