Adopt Me! Wiki
Register
Don't have an account?
Sign In
Advertisement
in: Pets, Legendary, Legendary Pets,
and 11 more

The Shadow Dragon is a limited Developer Product and Robux pet in Adopt Me! that was released during the 2019 Halloween Event from October 18, 2019 to November 1, 2019. It was obtainable by purchasing it for

It could be bought from the Candy Trading Shop near the old Graveyard or in the Gamepass Menu. It was located in front of the small tombstones along with multiple other pets exclusive to the 2019 Halloween Update. Other pets released along with the Shadow Dragon were the Zombie Buffalo, and later, the Evil Unicorn and the Bat Dragon. As the event has ended, it is now currently only obtainable by trading.

The Shadow Dragon has a skeletal and gaunt appearance. It is black in color with its most notable features including horns, arched snout, lavender glowing eyes, a tongue, wide wings, and visible spines and ribs sticking out along with a glowing tongue- although it is only visible at night. It has a partially exposed rib cage that emits glowing particle effects. Similar to the Parrot, Crow and Frost Dragon, the Shadow Dragon sits on the ground when not in motion.

Here are the tricks the Shadow Dragon learns in order:

In its Neon form, the Shadow Dragon has its horns, inner wings, and back spines glowing a bright white-purple. Its breath is more visible than it would be normally. 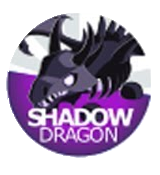