The Seahorse has a yellow body with a lighter shade on its underbelly. Its eyes are beady black, its snout is elongated, and its tail curves towards its body.

Listed below are the tricks the Seahorse learns in order:

The Mega Neon form of the Seahorse cycles through the colors of the rainbow in the same areas as its Neon form.

Adopt Me!'s teaser of the Seahorse.

A Seahorse on Adopt Me!'s thumbnail for the Ocean Egg Update. 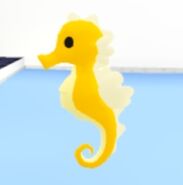 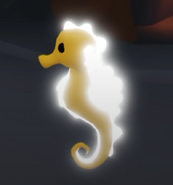