Adopt Me! Wiki
Register
Don't have an account?
Sign In
Advertisement
in: Monkey Fairground Event, Ingredients, Bucks,
and 10 more

Transform a regular Monkey into a Ninja Monkey

The Scroll Ingredient is an ultra-rare ingredient in the Monkey Fairground that can be obtained through opening Monkey Boxes. Monkey Boxes cost

If a player combines 3 Scroll Ingredients and a Monkey while talking to the Ninja Monkey in the Monkey Fairground, they will receive a Ninja Monkey, along with a Ninja Headband and a Kitsune Mask.

A player holding the Scroll Ingredient. 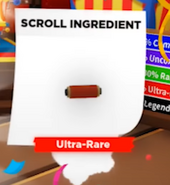 Image of a player getting a Scroll Ingredient out of a Monkey Box.
Community content is available under CC-BY-SA unless otherwise noted.
Advertisement