Adopt Me! Wiki
Register
Don't have an account?
Sign In
Advertisement
in: Pets, Scoob Event, Temporary,
and 7 more

The Scoob, which is sometimes referred to as Scooby-Doo, was a free pet that was temporarily available in the Adopt Me! Scoob Event. Once Scoob was fully aged, three pet accessory rewards were given. It was released on May 4, 2020, at 5:00 PM (UTC) with the Scoob Event. It was also a flyable and rideable pet, giving new players a temporary advantage when it was available.

The event ended on May 18, 2020, and Scoob was removed from the game. Although Scoob and the Mystery Machine were removed, the three pet accessory rewards stayed in the player's inventory.

This pet is temporary, similar to the Pet Rock, Pumpkin (Pet) and the 2D Kitty, which means it is now unobtainable since the Scoob Event has ended.

The items obtained after raising the Scoob to Full-Grown are the Detective Mustache, Detective Hat, and the Magnifying Glass. These items are all pet accessories.

Scoob has a brown body with a large black spot on the back. He has a long tail pointing upwards, black eyes, a black nose, brown ears, pink inner ears and brown feet. Scoob also wears a teal collar with golden decorations.

Listed below are the tricks Scoob learns in order:

The Scoob pet and the Mystery Machine.

The Scoob in a player's inventory. 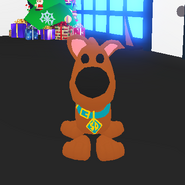 The Scoob on the Adopt Me!'s thumbnail.
Community content is available under CC-BY-SA unless otherwise noted.
Advertisement