Adopt Me! Wiki
Register
Don't have an account?
Sign In
Advertisement
in: Pet Accessories, Ultra Rare, Ultra-Rare Items,
and 8 more

250 (Price of the Dalmatian (Santa Dog) in its event)
The Santa Hat is a limited ultra-rare pet accessory in Adopt Me!. Players who had the Santa Dog (now referred to as the Dalmatian) before the Dress Your Pets Live Event, were given this hat for free after the update. Now, the only way players can obtain this item is through trading.

The Santa Hat features a pointy red hat with a white brim and a white pompom. It is the same hat that was previously on the Dalmatian (Santa Dog) before the update. 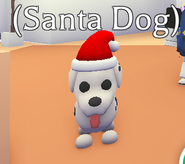 The Santa Hat as seen on a Dalmatian (Santa Dog).

The Santa Hat as seen on a Dog.
Community content is available under CC-BY-SA unless otherwise noted.
Advertisement