Adopt Me! Wiki
Register
Don't have an account?
Sign In
Advertisement
in: Vehicles, Christmas Event (2019), Collectible Items,
and 10 more

Shoots sparkle effects from out of the back.

4,300) from the 2019 Christmas Event. It can currently only be obtained through trading.

The Santa's Sleigh is a red-colored sleigh with a supplementary gold accent. Despite its name suggesting that the sleigh is to be pulled by reindeer, it instead floats on its own, in a similar manner to the Hoverboard. As it floats, the Santa's Sleigh bobs around in the air while producing a cloud of sparkles out of the back, symbolizing a car's exhaust. The Santa's Sleigh does not stop levitating or producing sparkles when parked.

The Santa Sleigh as seen in-game. 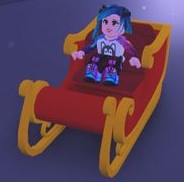 A player riding the Santa's Sleigh. 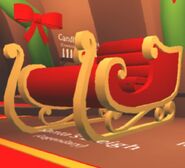 The Santa's Sleigh displayed in the Christmas Shop.
Community content is available under CC-BY-SA unless otherwise noted.
Advertisement