Adopt Me! Wiki
Register
Don't have an account?
Sign In
Advertisement
in: Toys, Common, Common Toys,
and 9 more

The Rubber Bone Throw Toy is a common toy in Adopt Me! that could formerly be purchased from the Pet Shop. This throw toy was previously purchasable for

100. However, it was removed in the new Pet Shop update on February 22, 2020, for unknown reasons. It is now only obtainable through trading.

The Rubber Bone Throw Toy features a long thin rod with curves along the opposite sides. This appearance, as true to its name, is made to imitate a pet bone.

Its color could previously be chosen upon purchase, however this color could not be changed once it was bought.

Similar to most throw toys, when thrown to an equipped pet, the pet would 'fetch' it to bring it back to the player. 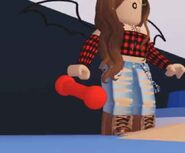