Adopt Me! Wiki
Register
Don't have an account?
Sign In
Advertisement
in: Gamepass, Vehicles, Legendary Vehicles,
and 4 more

1499 and it can be bought in the shop (button) or in the Neighborhood, from a pedestal promoting the pack to the right of the tunnel leading to Adoption Island.

To use the carriage, players can equip the item from the Vehicles section of their inventory.

The Carriage can be controlled by moving the joystick/WASD/front, left, right, back arrow to change the direction of movement. In order to stop driving, simply press the jump button or let go of the controller.

The Princess Carriage in a player's inventory. 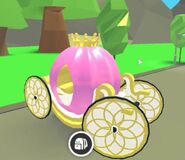 A Prince Carriage in a player's inventory.

The Royal Carriage in a player's inventory.

The Royal Carriages on display.
Community content is available under CC-BY-SA unless otherwise noted.
Advertisement