Adopt Me! Wiki
Register
Don't have an account?
Sign In
Advertisement
in: Vehicles, Gamepass, Gamepass Vehicles,
and 5 more

1,499. The Royal Carriage's counterparts are the Prince Carriage and the Princess Carriage.

It is one of the six carriages released to Adopt Me!, the others being the Prince Carriage, Princess Carriage, Bunny Carriage, Pumpkin Carriage, and the Ribcage Carriage.

The Royal Carriage is a luxurious black and yellow striped carriage, with a gold crown, white seats, and black and yellow wheels. Just like the Princess Carriage, it has a fully covered roof and glass windows connected to the doors.

It is the only vehicle in the Royal Carriages pack that does not have 6 seats.

The Royal Carriage in a player's inventory. 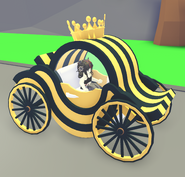 A player riding the Royal Carriage.
Community content is available under CC-BY-SA unless otherwise noted.
Advertisement