Adopt Me! Wiki
Register
Don't have an account?
Sign In
in: Toys, Rare, Rare Toy,
and 8 more

Can be given to an equipped pet to chew on.

499 (Small, Big, and Massive Gifts), Trading
The Rope Chew Toy is a limited rare toy in Adopt Me! that could have been obtained through opening Small, Big, or Massive Gifts for

As of the 2021 Gift Refresh update, the Gifts were replaced with another set of items. It can now only be obtained through trading.

The Rope Chew Toy features a striped pastel and hot-pink knit rope knotted on both sides.

The Rope Chew Toy, as true to its name, is a chew toy in which pets 'chew' on when the player drops it. To drop this item, the player clicks to interact.

After this item is dropped, an equipped pet will run over to it and hold it in their mouth. They will then stay in the same spot the item was dropped until the player unequips the pet or picks up the item again. 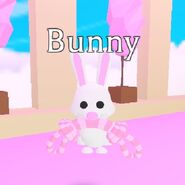 A Bunny holding the Rope Chew Toy.
Community content is available under CC-BY-SA unless otherwise noted.