Adopt Me! Wiki
Register
Don't have an account?
Sign In
Advertisement
in: Vehicles, Legendary Vehicles, Limited,
and 9 more

View source
watch 02:52
Roblox: DeepWoken - The Loop
Do you like this video?
Play Sound
Not to be confused with Rocket Racer.

Trading. Was obtainable from 2017 Christmas Gifts.

The Rocket Sled is a limited single-seater legendary vehicle in Adopt Me!.

The Rocket Sled could be found in the Massive Gift, which costs

625. As the Gifts rotation has been updated with new items, it can only be obtained through trading.

The Rocket Sled is currently the fastest vehicle in Adopt Me!, having the ability to traverse from one side of the map to the other in just a couple of seconds. A downside to its outrageous speed is that the Rocket Sled can prove to be extremely difficult to control, especially around sharp corners, narrow roads, and bridges.

The Rocket Sled is also a single-seated vehicle, meaning only the player can ride it, with no passengers.

The Rocket Sled features a rather normal-looking sled with two large and symmetrical rockets attached to either side of it. This vehicle emits yellow/green fiery embers out of the two rockets that are attached to its sides.

The rockets themselves have each of their sections painted in different colors, beginning from the bottom with a black color where the fire particles originate, then an orange, fire-like piece, possibly meant to symbolize where the fuel for the sled is stored in, a silver part, a chrome/glass textured piece, another black piece similar in color to the one at the bottom of the rockets, and then finally concluding at a red-colored tip. Each of the rockets is made up out of a total of six parts. 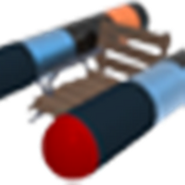 The Rocket Sled in a player's inventory. 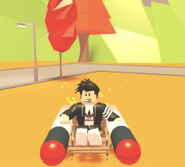 A player riding the Rocket Sled.
Community content is available under CC-BY-SA unless otherwise noted.
Advertisement