Adopt Me! Wiki
Register
Don't have an account?
Sign In
Advertisement
in: Vehicles, Star Rewards, Interactable,
and 4 more

View source
watch 02:34
Fire Emblem Warriors: Three Hopes - The Loop
Do you like this video?
Play Sound
Not to be confused with Rocket Sled.

The Rocket Racer is an ultra-rare, single-seater vehicle in Adopt Me! that is obtainable from Star Rewards. Players can obtain it once they reach 500 Stars or through trading.

The Rocket Racer is a red open-wheel car, with a mostly bright red paint job and a dark gray line going along the air intake. The spoiler of the racer has the number 7 on it, and there are two small stickers of what appear to be sponsors on the side of the car. The Rocket Racer has unique wheels with yellow rims, a rim color that is only present on one other vehicle, the now-removed Mystery Machine. This car is also a Formula 1 Race car reskin.

The Rocket Racer is one of the longest vehicles in terms of length in the game. This is most likely because it is based on open-wheel cars, which are designed to maximize traction and aerodynamic efficiency. The short height of the Rocket Racer makes it possible for players with the parent role to park it in the Luxury Apartments' parking lot without getting stuck.

The Rocket Racer as it appears in the Star Rewards list. 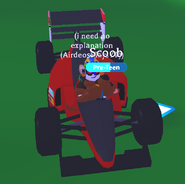 A player riding the Rocket Racer. 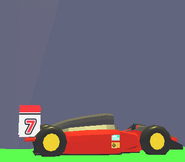 The Rocket Racer's right side, showcasing its two sponsor-like stickers.
Community content is available under CC-BY-SA unless otherwise noted.
Advertisement