Adopt Me! Wiki
Register
Don't have an account?
Sign In
Advertisement
in: Pets, Christmas Event (2019), Unavailable Pets,
and 9 more

The Robin is a limited common pet, which was added to Adopt Me! on December 14, 2019 as a part of the 2019 Christmas Event. As it is now unavailable, it can only be obtained by trading or by hatching any remaining Christmas Eggs. Players have a 45% chance of hatching a common pet from the Christmas Egg.

The Robin has a dark orange underbelly and part of the face, and the outer area of its body is brown. It has a slightly lighter orange for its legs, black beady eyes, a black beak, and is complete with three tail feathers.

Here are the tricks the Robin learns in order:

The Neon Robin glows orange-yellow on the inside of its body and feet.

A Mega Neon Robin glows in the same areas as the Neon Robin, except it cycles through the colors of the rainbow. 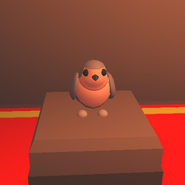 The Robin on display in the Christmas Shop.