Adopt Me! Wiki
Register
Don't have an account?
Sign In
Advertisement
in: Gamepass, Potions, Robux,
and 4 more

The Ride-A-Pet Potion is a legendary potion in Adopt Me! that can be found and purchased in the Sky Castle for

150. It can also be obtained through trading. It was added to the game in August 2019, shortly after the Pets Update.

If a player clicks its icon while they have it equipped, they will be prompted with the message: "Product Description: Feed this to any pet to make it permanently rideable."

Once a player has fed a Ride-A-Pet Potion to a pet, the pet will be able to be ridden. In order to activate a pet's ride ability, players will have to interact with their pet and press "Ride" or pull a ride potion out of their inventory and press 'Feed'.

Its counterpart is the Fly-A-Pet Potion.

The Ride-A-Pet Potion features a clear, horse-shaped bottle with an orange bottle cork. Players can visibly see the glowing hot pink liquid inside.

The Ride-A-Pet Potion in the old Pet Shop.

A player riding a Neon Rat.

Ride Potions in the Potion Shop.

A player holding the Ride-A-Pet Potion. 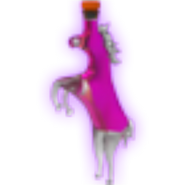 The Ride-A-Pet Potion in a player's inventory.
Community content is available under CC-BY-SA unless otherwise noted.
Advertisement