Adopt Me! Wiki
Register
Don't have an account?
Sign In
Advertisement
in: Halloween, Halloween Event (2020), Limited,
and 9 more

Buying it during the 2020 Halloween Event, Trading

The Ribcage Carriage is a limited legendary four-seater vehicle in Adopt Me! that was available during the Halloween Event (2020) that could be purchased for

3000. Since the event has ended, it can now only be obtained through trading.

The Ribcage Carriage's speed matches that of every other carriage in the game, however it has an added benefit of being a four seater, compared to all the other non-Robux costing carriages that were available before it.

The Ribcage Carriage is a carriage that is constructed primarily out of bones. The middle part of the carriage's body resembles an open human ribcage. The interior features two sofa-like red seats, a black floor, and a lantern tied in with ropes on both sides. The lantern illuminates at night. The carriage has two unique sets of large wooden wheels. Above the wheels are two spine like bones with small spikes. 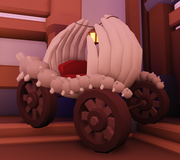 The Ribcage Carriage in the shop. 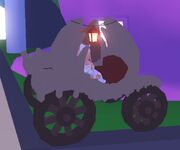 A player riding in the Ribcage Carriage. 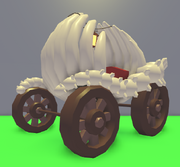 The Ribcage Carriage as seen in-game.
Community content is available under CC-BY-SA unless otherwise noted.
Advertisement