These are the tricks the Rhino learns in order:

The Neon Rhino's feet, horns, inner ears and tip of the tail glow a salmon color.

The Mega Neon Rhino glows in the same areas as the Neon Rhino, except those areas cycle through the colors of the rainbow. 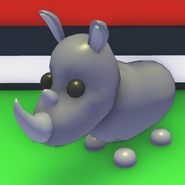