watch 03:19
Wiki Targeted (Games)
Do you like this video?
Play Sound

The Red Squirrel is a non-limited ultra-rare pet that was released into Adopt Me! on May 13, 2021. It costs

200. The Red Squirrel also brought along the updated Toy Shop.

The Red Squirrel primarily has a chestnut-colored body except on its underbelly, and the back side of its tail where it is colored beige. It has two small legs and arms and a large bushy tail. On its head, it has two large black eyes, a light pink heart-shaped nose, and two ears.

Here are the tricks the Red Squirrel learns in order:

The Neon Red Squirrel glows mustard yellow under its neck, under the tail, and on its belly.

The Mega Neon Red squirrel cycles through the rainbow colors under its neck, under the tail, and on its belly.

A teaser of the Red Squirrel.

The Red Squirrel in the Pet Shop. 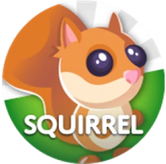 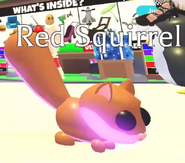 A Mega Neon Red Squirrel.
Add a photo to this gallery
Retrieved from "https://adoptme.fandom.com/wiki/Red_Squirrel?oldid=319121"
Community content is available under CC-BY-SA unless otherwise noted.